Did you know Benin was the first smart city in the world?

Don’t worry, most people don’t. So let’s engage in this exciting discovery through history together, and find our ways to charting out the future we want to live in together.

A well-researched Guardian article by Mawuna Koutonin is instructive here. Describing the layout of the city, he writes, “Benin City’s planning and design was done according to careful rules of symmetry, proportionality and repetition now known as fractal design. The city and its surrounding villages were purposely laid out to form perfect fractals, with similar shapes repeated in the rooms of each house, and the house itself, and the clusters of houses in the village in mathematically predictable patterns.”

Kutonin also writes about the sophistication of the main streets which “ran at right angles to each other, had underground drainage made of a sunken impluvium with an outlet to carry away stormwater.” Other researchers write about the impressive walls of the city. British geographer, Patrick Darling, in particular, draws comparisons to the pyramids of Egypt and the Great Wall of China. 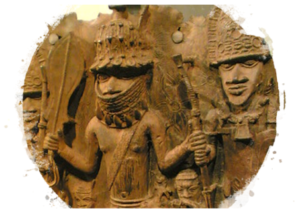 Alas in 1897, the city got destroyed by British soldiers. This explains why, when I was born and bred in Benin in the 1990s, I never saw or heard stories of its greatness. I only saw the bad roads, chaotic markets and beggars on the streets. Thankfully my parents found ways to imprint on me self-value and a reason to believe I could find progress in that world.

Most of African history prior to the 15th-century got suppressed by colonial nations as a strategic act to strip the people of their self-belief. Thankfully some of the stories are beginning to resurface through the works of scholars like Dr Ron Eglash and Zeinab Badawi in their edifying Ted talks.

As we build the 4th industrial revolution, Africans today should use these historical accounts of innovation as the stepping stones for their continued progression.

Africa’s Journey Through The Revolutions

Africa’s place in previous industrial revolutions has at turns been forced, silenced and met with significant challenges.

In the first industrial revolution, that of the 17th and 18th centuries, the Transatlantic Slave Trade, the trade of African people, supplied cheap labour that powered rapid growth around the world.

The 2nd revolution saw the exploitation of African resources from the African colonies of that time. Those resources supplied cheap energy and raw material to power new systems.

The 3rd industrial revolution or digital era of the late 20th century heralded electronics, telecommunications, and of course computers. The United States became the leader of the free world in this period, and China along with a few other Asian countries made rapid progress to become critical manufacturing and ICT hubs.

Alas, while Africa had cut her ties with its colonial masters, her countries began to undergo growing pains, characterized by neocolonialism, military coups, civil wars, poor governance and corruption. Not until the early 21st century, when key African countries started to register decades of peace and stability, did the world start to tell stories of the “Africa Rising” narrative championed by McKinsey’s Acha Leke.

“Let Africa sleep; for when she wakes she will shake the world with rhythm”

This era brings yet another inspiring and overwhelming turn around in the way things are produced and how they function. The fourth industrial revolution, also known as 4IR or Industry 4.0, has its foundation in digitization rather than an energy source. According to Klaus Schwab, founder and Chair of World Economic Forum, “the changes are so profound that from the perspective of human history, there has never been a time of greater promise or potential peril.

The new revolution allows a more comprehensive, interlinked, and holistic approach to understanding the world. It connects physical with digital, and allows for better collaboration and access across departments, partners, vendors, products, and people.

The Growing African Voice in Innovation and Model for the Future

“Africa has many challenges where the use of artificial intelligence could be beneficial, sometimes even more than in other places,”

I visited five countries in Africa last year to evangelism the importance of emerging technologies to driving growth. I was pleased to read about favourable trends unfolding on the continent but observed that they weren’t receiving the private and public capital they require to realize their promise.

I did, however, find a couple of organizations springing up around the continent, building communities and real solutions to critical problems to start the movement. Strategic coverage and support of their work can ignite the movement’s expansion and support the growth of technical skill in Africa’s growing youth population. 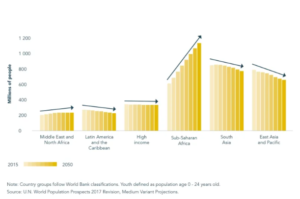 In the north, Tunisia and Egypt are becoming homes to fast-growing startups either building AI services, or using AI to drive business value, empowered by enabling startup Acts. A notable mention is InstaDeep, which has grown to have engineering offices in four African countries and sales offices in London and Paris. It partnered with the Tunisian government in summer 2019 to host an ML hackathon that needed a stadium to hold its 1,000 participants.

In the west, organizations from Nigeria, Ghana and Senegal are showing traction. Data science Nigeria initiated over 10 programs to reach more than 20,000 beneficiaries in 2019. They help kids, young adults and top corporate executives learn about AI, connect AI-skilled talent with jobs and collaborate with the likes of the Gates Foundations to design solutions to UNDG challenges.

Towards the east, Kenya, Rwanda and Ethiopia are developing vibrant tech communities of startup Hubs and AI innovators. For instance, the Nairobi Chapter of Women in Machine Learning and Data Science has hosted more than 2000 meetups. Beyond them, I continue to be impressed by the exploits of Ethiopia’s Icog Labs. This group, inspired by its Singularity University-trained founder, built the brains for the world’s most famous robot, Sophia. I was not surprised to find that almost every notable AI engineer or researcher in Ethiopia had spent at least a summer or couple of years at the Icog facility. They continue to build world-class solutions, and bring us closer to artificial general intelligence (AGI).

Down south, governments are attacking the fourth industrial revolution head-on, with the likes of South African President Cyril Ramaphosa commissioning a 30-person council to design the country’s strategy to be a regional powerhouse in Industry 4.0. South Africa is already home to the world’s only square-kilometer array to explore the universe, and Happy Sithole’s Lengau supercomputer system that provides computing power for universities and researchers across member countries. A growing consortium of African universities led by the Cirrus initiative is looking to build a much larger supercomputer to allow African researchers to unlock the insights on data piles they currently sit on. All these are in addition to local data center deployments by Microsoft, Amazon and soon Google, on top of connectivity infrastructure driven by African corporations such as Convergence Partners and Liquid Telecoms.

All these organizations are building globally relevant AI, driven by the complex and diverse use cases in Africa which uniquely apply to societies in the Americas, Europe and Asia. I mostly joke that after learning to drive in my birth city of Benin which barely had working streetlights, I found driving in New York City easy, even with its 20 million people. Very similarly, AI and technology solutions built for African scenarios tend to apply to other parts of the world.

Consider work on climate change. Farmers in Africa are among the first to experience the effects of climate change. They can work with innovators at home and abroad to identify these adverse effects early to build solutions that then apply to other parts of the world. In one fantastic interview, Local Ocean Co. on the eastern shores of Kenya partnered with Microsoft and Zindi to analyze images of sea turtles they’d collected for 20 years to extract useful information on how the ecological system had evolved during those decades.

Insights from Africa will help us sustain our planet.

Our organization Alliance4ai is simply the mouthpiece of all these organizations, providing a birds-eye view on the works of all Africans and evangelizing the use of ai, as captured on our YouTube channel. With the amalgamation of 5 key elements — our aggregated market view, growing data center & connectivity infrastructure, better sync between deep-tech training organizations & application companies, our AI clinics for startups and the near-annual doubling of VC funding to startups in Africa — we envision the initiation of a ten-year period that’ll see great African organizations rise to elevate Africa’s socioeconomic standing in the world.

Within hours of publishing this article, President Cyril Ramaphosa of South Africa delivered his acceptance speech as the incoming chair for the Africa Union in 2020 and established AI as a priority for his agenda. He announced the creation of an Africa AI Forum, an initiative Alliance4ai has been in support of and will help enable to bring together a league of African experts in AI at home and abroad, working together to enable Africa to take a quantum leap into the economy of the future.

With the right level of coordination, collaboration and spirit across Africa perhaps, we shall rebuild the great walls of Benin city, Zimbabwe and other historic cities, and re-lay the foundations of Africa’s legacy for the future. Children in remote parts of Africa will believe in their abilities to leverage resources and chart their paths to success.

Africa will not be left out of the 4th industrial revolution.

WeFarm connects over 1 million farmers to grow together

Modelling through AI for an ever-changing world